Welcome to the post-delta market. Why the re-opening trade is ripping higher


The market gains confidence that delta has peaked

Market sentiment has made a radical turn in the past few days in a reflection of some improvement in covid cases in the world’s two largest economies.

First, the market grew increasingly convinced that cases in Florida have peaked with the rest of the country also cresting.

It’s tough to see the bend in national cases but it’s there with the seven-day average of cases stuck near 150K.

What may be built into the market though — and something certainly worth watching — is a quick drop in cases similar to the UK and India. So far there’s no clear sign of that but many are hoping it will follow the same path and Florida cases, shown below appear to be dropping quickly (albeit with some data quality caveats). If that’s the case, then there a positive risks.

Secondly, China appears to have halted the delta outbreak. Now there are certainly skeptics on the China file and rightfully so but you have to take the numbers are fair value. So far, China has been remarkably good at containing outbreaks via strict lockdowns and mass testing.

Yesterday, the country reported zero local covid-19 cases for the first time since July. Again, that’s tough to believe as we’ve witnessed New Zealand cases go from one to 148 in a week but so long as China isn’t locking things down, the market doesn’t really care.

Speaking of New Zealand and the outbreak there and Australia, it’s simply not material for the larger global economy. They’re two countries that represent a tiny portion of global GDP and even if they’re stuck in lockdown until December it’s not going to move the needle outside of AUD and NZD.

In other parts of the world, the good news isn’t getting as much air time as it should. It appears as though global cases are also rolling over. 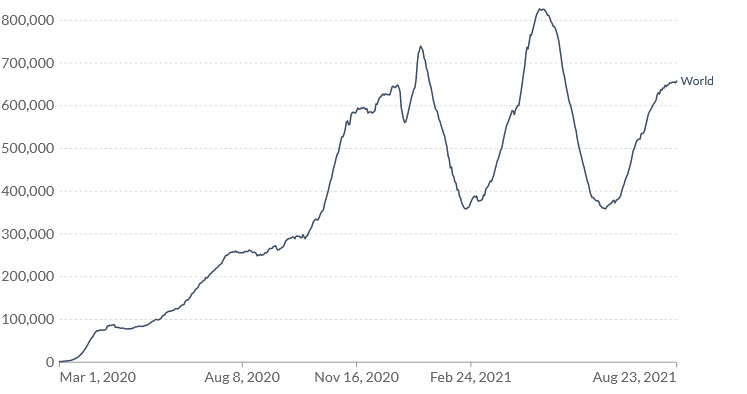 So while the US, New Zealand, Australia and China have been eating up all the news bandwidth, cases are falling in India, Russia and Latin America. Case growth even appears to be slowing in Israel.

Market participants are asking themselves: If global cases truly are rolling over, how do I want to be positioned?

You can see the answer to that question in today’s price action as reopening stocks, commodities, and risk trades ride high.

The market is also betting that Powell won’t spoil the party on Friday. I think that’s the right bet but it’s important to note that as the market grows more confident that delta is fading, so might Powell.