US jobs data adds over 1M jobs in July

Overall, with revisions, the US added 1.062M jobs which is good news for the economy.

The one cautionary tone is that the local government education category (part of Government) is out of sync with the seasonal adjustments due to Covid. It showed a oversized 220K increase in jobs and may have a “give back” in coming months.  Nevertheless, the report was still very solid.

As a result, traders will now be looking for Fed comments as the market prepares for a taper that may/should be sooner than expected.

Fed’s Clarida said this week that he could see a December taper . Fed’s Wallers, Bullard and Kaplan would rather start the taper sooner rather than later so the Fed could have flexibility to tighten interest rates in 2022 if needed.  Next week, the market will hear from Fed’s Bostic, Evans, George and Barkin are all expected to speak next week. I would imagine, it will be hard to keep Fed’s Bullard from an interview at some point (he is not shy especially if he is right and he has been one of the more hawkish Fed officials and will be voting in 2022).

Goldman Sachs increased their chances for a November taper to 25% and December 55%. The Fed Chairs Jackson Hole speech (the event takes place from August 26 to August 28) becomes days to circle on the calendar for taper clues.

The reaction in the markets saw:

Looking the strongest to weakest in the forex market, the USD is ending the day as the run-away strongest of the major currencies. The CHF and the AUD were the weakest. 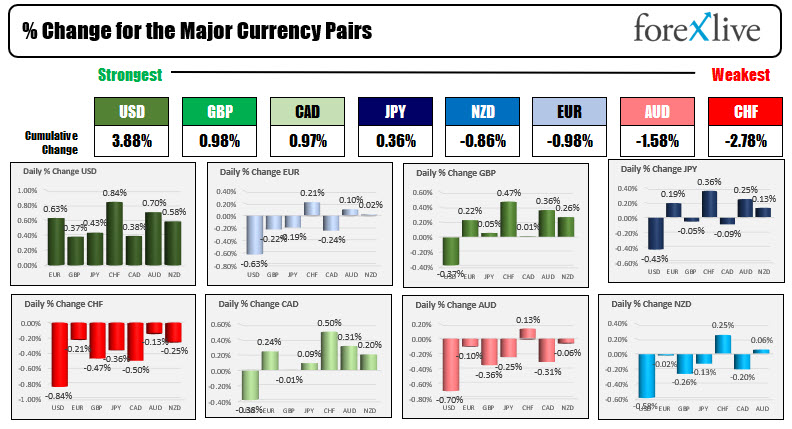 The Nasdaq index light with a -0.4% decline after closing at a record level on Thursday. Despite the decline today, the NASDAQ index led the way with a 1.0% gain for the week.

In the European market today, the major indices all closed higher but off their highs levels. The France’s CAC rose by 0.53% and closed at its highest level since 2000. It is only 100 points or so from its all-time record high.

In the US debt market, yields this week trade as low as 1.127% in the benchmark 10 year yield. The yield is going out the week at 1.293% up nearly 16 basic point from the weeks low.  Next week will be a key test for the global demand of US debt, as the U.S. Treasury will auction off:

Wishing you all a great and healthy weekend. Thank you for your support this week. Adam Button will be back on Monday.