US infrastructure deal sends Nasdaq and S&P to record

President Biden, along with a bi-partisan group of centrist Senators, agreed to a infrastructure package of $973 billion over five years, and $1.2 trillion if continued over eight years.  The package would fund improvements to roads, bridges, transit, airports and enhanced infrastructure for broadband, water and electric vehicles. What it did not include, were “human infrastructure” programs that were part of the Presidents election promise such as child care, elder care, and education provisions.

How would they pay for the first tranche?

Some sources of funds comes from:

The expectations for plan sent stocks higher at the opening. The S&P index and NASDAQ both opened at record levels and remained above those levels throughout the trading day.  The biggest gain or the day was the Dow industrial average which it rose 322.58 points or 0.95%.  The high for the day extended up 1.06%.  The NASDAQ index increased 98 points or 0.69% and reached and intraday high of +1.0%. The S&P index rose 24.86 points or 0.59% after peaking intraday with a gain of 0.7%.  The small-cap Russell 2000 index was also up sharply on the day (up about 1.3%)..

In the European equity markets today, the major indices also closed solidly higher with the Spain’s ibex up 1.34%, and Italy’s FTSE MIB up 1.38%. The UK’s FTSE 100 only gain 0.51% and was the biggest laggard for the day.

In the forex market, the NZD was the strongest of the major currencies, while the GBP was the weakest. The GBP was hit just before the New York traders enter for the day on the back of a less hawkish BOE.   Although the pound remain the weakest of the majors, it did recover in the New York session closing off the low levels for the day.  The EURUSD, USDCHF, AUDUSD and NZDUSD all had narrow trading ranges between 26 pips (for USDCHF and AUDUSD), and 38 pips (for the EURUSD). The US dollar was little change (0.14% or less) versus the EUR, JPY, CHF, AUD and CAD.  The USD was up 0.25% vs the GBP and down -0.23% vs the NZD. 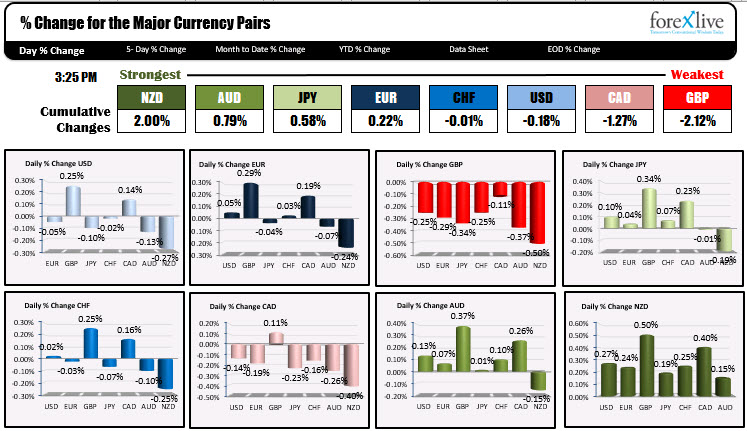 In the US debt market, yields are ending mixed with some quirky changes in the yield curve. The five year yield was up 3.2 basis point. The 10 yield was up 1.0 basis points but the 30 year yield was down -0.4 basis points. The US treasury was successful in auctioning off $62 billion of seven year notes at 1.264%. There was strong demand from domestic and international buyers with a bid the cover comfortably above the six month average.