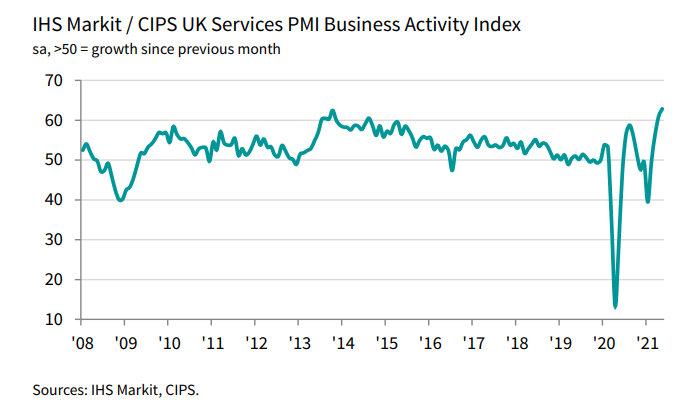 The preliminary report can be found here. Stronger revisions only add to the gloss on this report as UK services sector output growth is seen at its quickest in 24 years.

The reopening of the economy and looser virus restrictions also saw employment conditions improve at its strongest rate in just over six years.

The only negative in the report is that input cost inflation continues to remain elevated – the highest since July 2008 – with the steepest increase in prices charged by service providers being observed since the survey began in 1996. Markit notes that:

“UK service providers reported the strongest rise in activity
for nearly a quarter-century during May as the roll back
of pandemic restrictions unleashed pent up business and
consumer spending. The latest survey results set the scene for
an eye-popping rate of UK GDP growth in the second quarter
of 2021, led by the reopening of customer-facing parts of the
economy after winter lockdowns.

“Pressure on business capacity due to a spike in demand and
staff hiring difficulties emerged as a major challenge for service
sector companies in May. Job creation was the strongest
for over six years, but backlogs of work accumulated to the
greatest extent since the summer of 2014.

“The successful vaccine roll out has generated a strong
willingness to spend and fortified business optimism across
the service economy. However, inflationary trends intensified
in May as suppliers passed on higher transport bills, staff costs
and raw material prices. Imbalanced demand and supply
appears to have spread beyond the manufacturing sector,
which contributed to the steepest rise in prices charged by
service providers since the survey began in July 1996.”