It seems like the old “buy the rumour, sell the fact” play (opposite side this time) is working out for oil as price continues to climb in the aftermath of the OPEC+ decision.

Even though OPEC+ chose to keep restoring supply in January, oil prices are starting to form a base at the recent lows as bargain hunters swoop in. As mentioned yesterday:

I fear if OPEC+ decides to let things slide today, we may see another flush lower in oil perhaps back towards the August lows of $61.75.

That will be the next key test before getting to the pivotal $60 mark but considering the massive slide since October, it would be hard to resist any bargain hunting at those levels for a medium-to-long-term setup for oil.

The low yesterday didn’t quite hit the August lows of $61.75 but it did slide to $62.43 and that was enough for buyers to quickly turn things around. A look at the daily chart: 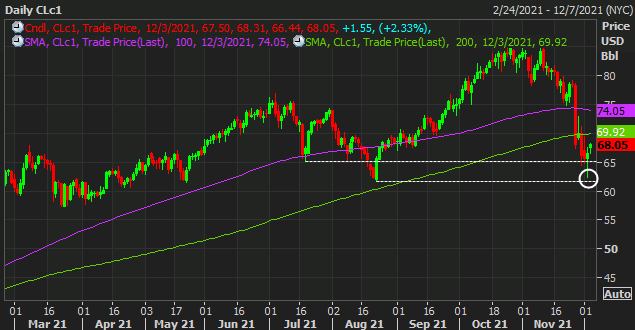 Now with OPEC+ risks out of the way, bargain hunters may be looking for more and yesterday’s dip was certainly one that is at least worth scaling into long positions for the medium-to-long-term at the very least in my view.

As much as omicron may restrict global reopening further in the months ahead, it isn’t going to derail it surely as governments are way past that at the moment.

The real fear is that omicron escapes vaccine immunity and that it threatens a spike in mortality rate but so far, vaccine makers are quick to reassure that they can get ready a solution in just a matter of “months” despite some early pessimism.

The near-term chart is also starting to look better for oil as price is making its way back up to contest a push above the 100-hour moving average: 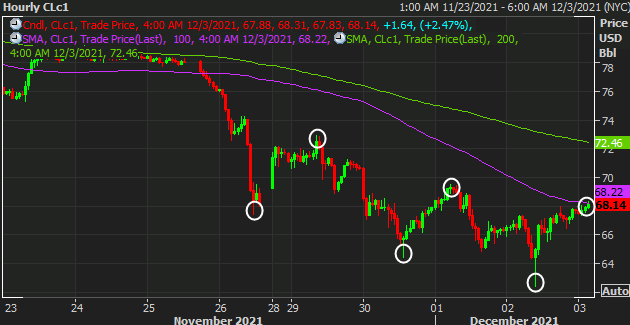 That will free up some room for price action to roam between $68.22 and $70.00 as buyers will look to try and break the recent lower highs, lower lows pattern that had been developing throughout the week so far.