The market was anticipating some key events and releases today.

The next key event was at 10 AM ET when the ISM services index was released. Contrary to the ADP report, this report came in at a record high level of 64.1. Moreover, employment did not show weakness but rebounded from a sub 50 level last month to 53.8. New orders rose to 63.7 from 62.1. Order backlog remained high at 63.5.  Exports kicked on reopenings overseas at 65.8 vs 50.7 in June.  Strong across the board for that report.

At the same time, Vice Chair Clarida was speaking and although his speech and commentary was not as hawkish as Fed officials like Bullard, Kaplan and Waller, it was certainly not as dovish as Powell, Brainard or Kashkari. More specifically, he said that his base case called for raising interest rates by the end of  2022, and to start tapering by December (if his base case projections are correct). That is not the “start by September” like the other hawks but it does not have a 2022 date either.

The combination of Clarida, and the ISM services record numbers, reversed the dollar to the upside. It was fast break the other way.

Looking at the rankings of the strongest to the weakest, the USD won the silver behind the NZD who won gold.  The NZD was the strongest coming into the day and remained that way on the back of a much stronger than expected jobs report which now has analysts looking to August RBNZ meeting as the start of tightening.   The weakest of the majors was the JPY followed by the CHF. 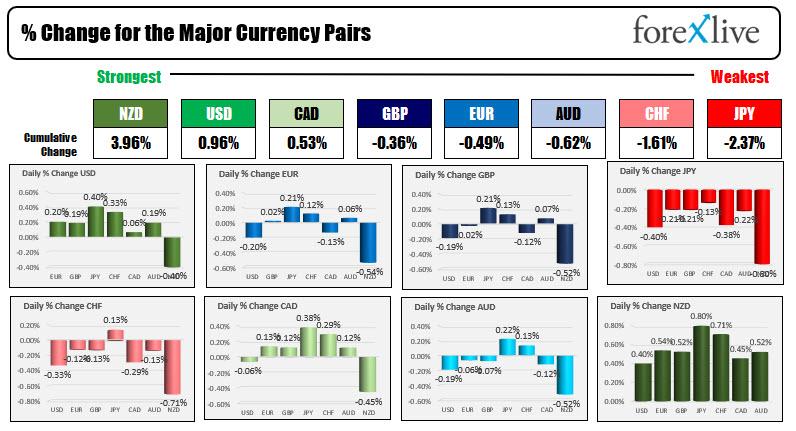