The USD is ending the day mixed with gain diversity CHF and NZD and declines vs the EUR, GBP, JPY and AUD nearly cancelling each other out. 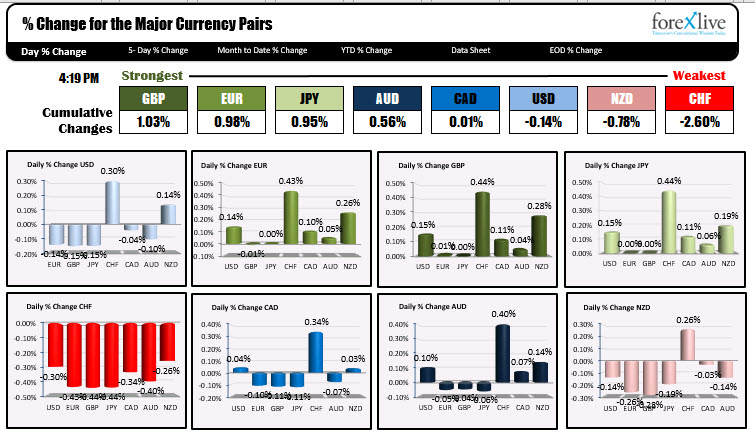 Tomorrow the CPI will be released with expectations of the YoY headline number reaching the highest level since September 2011 (expecting 3.6%). The core measure is expected to rise to a more modest 2.3% YoY which was last surpassed on February 2020 at 2.4% (just before the pandemic).

The month-to-month is expected to rise by 0.2% while the core is expected to increase by +0.3%. The sharp rise in the year on year is largely due to the -0.7% decline in April 2020 (the so called base effect). That is being replaced by a expected 0.2% gain.  The core reading in April 2020 fell -0.4% and is expected to be replaced by a +0.3% gain.   The market has been inundated with Fed officials saying inflation will go up in the short term because of base facts and supply chain problems, but they expect the gains to be transitory. Tomorrow will be a test to see how the market reacts to “the transitory” spike higher in consumer price inflation.

For today, the dollar is trading mixed/near unchanged levels,

Today was once again light on data front. The JOLTS job openings were released and was higher than expectations, but as is the case each month, the data is old news (It is March data). We already have the April jobs report out which showed weakness. As a result, the market largely ignored the data.

What WAS of interest early on, were comments from legendary investor Stanley Druckenmiller who during an interview on CNBC said (amongst other things) that “he can’t find any period in history where policy was so out of step with the economy”.  He thinks that the dollar will lose reserve status and is to be replaced by some kind of crypto ledger. That he expects he will be out of stocks entirely by the end of the year, and has shifted a lot of his bets into commodities and interest rates. He also said that his family office  (he does not manage outside money any more) was up 42% last year and is up 17% so far this year.

The comments added fuel to the premarket selling, but after stocks opened the sharply lower, they began to recover and shift from Nasdaq selling to Dow selling. At the end of the day, the NASDAQ closed marginally lower (by -0.09%), while the S&P index (-0.87%) and the Dow (-1.36%) were the dogs for the day. All in all the major indices closed lower for the second consecutive day.

In the US debt market today, the treasury auctioned off $58 billion and three notes at 0.2 basis points above the WI level. The demand was satisfactory/not spectacular. Tomorrow the treasury will auction off $41 billion of 10 notes, and on Thursday 30 year bonds. Yields today were higher with a steeper yield curve. The 2-10 the spread rose to 146.29 from 144.92 basis points.

Feds Mester, Brainard, Daly, Bostic, Harker, Kashkari, AND Bullard all spoke at one point today. The commentary was mostly along party lines from the Fed with expectations for inflation to be transitory, that growth to be strong, but employment still lags behind.