The start of the trading week in North America was met with some added fear of the Delta variant of the Covid virus. China Caixan PMI index was the lowest since April 2020 (50.3 –  just above the expansion benchmark). Eurozone PMI data was pretty good with German retail sales surging a greater than expected 4.2% (vs 1.9% estimate). The price of oil was lower by about $0.90, yields were lower but only by a basis point or two, and stocks were higher in premarket trading.

However, as trading got underway in the North American session, some of the smaller trends started to move more in the initial direction. Yields started to tumble with the 10 year moving to a low of 1.151%. That was within shouting distance of the low from July 20 at 1.1228%.

The price of WTI crude oil futures also started to move sharply lower. It went from down -$0.90 at the start of the North American session, to down $-3.37 at the lows.  Concerns about growth took the price lower.

US stocks initially moved higher but started to give back gains. The NASDAQ index was up close to 100 points at the highs (it ended up only 8 points. The Dow industrial average is up 256 points at the highs before giving up all the gains and then some (it closed down -97.31 points).

The ISM manufacturing and see came in weaker than expectations of 59.9 versus 60.8. Although still well above the 50.0 level, the index is indicative of slower upside momentum in the manufacturing sector.

In the forex, most of the flows was into the relative safety of the JPY. The AUD is ending as the strongest of the majors (which is kind of a surprise given it tends to be a risk off currency), but the JPY is ending not far behind as the strongest of the majors.   Technical breaks in the USDJPY, GBPJPY, EURJPY, CADJPY also helped to the JPYs run higher.   The CADJPY was one of the biggest movers helped not only by the flight into the JPY, but also the move out of the CAD due to the sharp fall in the price of oil.  The CAD was the weakest of the majors followed by the NZD.

Below are the rankings of the strongest to weakest of the majors today. 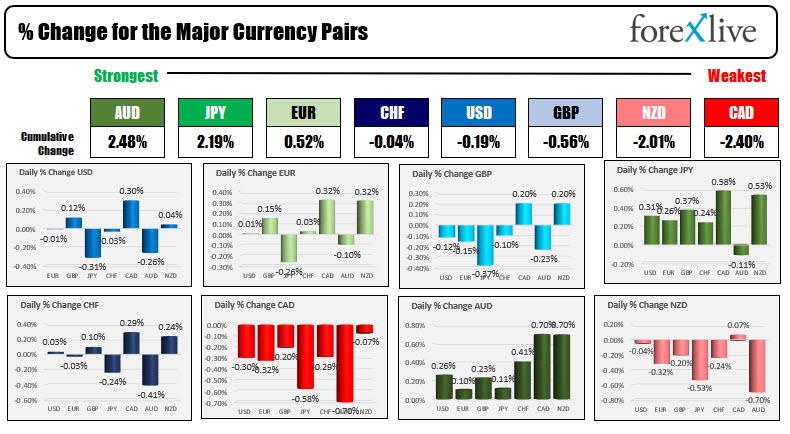 Although today had a bit of the fear of growth feel, of note were comments from Fed Gov. Waller who said that if the expected jobs gains materialize  over the next few months, that he could see the taper process starting as soon as September. He also said that he felt the Fed should “taper early and fast so the Fed can be in position to raise rates in 2022 if needed”.

Those comments were more on par with the hawkish comments from Bullard from last Friday. They also are a bit incongruent with other governors who have tended to side more with Chair Powell.