Been great to be with you all this week as Justin takes some well deserved time away.  I haven’t quite done yet as I wanted to drop in with the latest central bank update. Taking a step back the feel I am getting is that CB’s are thinking about thinking about tightening. The ones that are not (but maybe should be like the RBA and BoE) may find some pretty sharp corrections in their currencies higher, at least on a meeting with a surprise twist.

Once again the June 01 RBA meeting was uneventful. No rate hikes expected until actual inflation is within the 2-3% range and supportive monetary conditions (low rates etc) are to be maintained in order to support a return to full employment and for inflation to be consistent with this target. The labour market is not expected to be tight enough to spur higher age growth (and therefore inflation with it) until 2024. So, on hold with rates until 2024 is the mantra. The RBA noted that significant outbreaks of the COVID-19 virus remain, but as more people get vaccinated this risk should fade.The RBA still sees inflation in underlying terms remaining low and underneath the central bank targets. The economic recovery is stronger than earlier expected and is forecast to continue. The Bank’s central scenario is for GDP growth by 4.75% and 3.5% over 2022. Progress in reducing unemployment has been faster than expected with unemployment expected to drop to around 5% by the end of this year.

As mentioned in the last central bank overview, one of the key economic points to look at going forward, is the unemployment rate. Fast progress here and this is what will move the RBA’s dial. Say, we got a surprise jump down to below 5% then that should bring forward the RBA interest rate projections and the trade would be to buy the AUD a few days or even just the day before the next rate meeting.

The July meeting is key for the Reserve Bank of Australia (RBA) because it is the place where key decisions will be made about the QE programme and whether the current yield curve control will be maintained. Here is an extract from June’s statement:

“at its July meeting the Board will consider whether to retain the April 2024 bond as the target bond for the 3-year yield target or to shift to the next maturity, the November 2024 bond. The Board is not considering a change to the target of 10 basis points. At the July meeting the Board will also consider future bond purchases following the completion of the second $100 billion of purchases under the government bond purchase program in September. The Board continues to place a high priority on a return to full employment”

RBA’s Governor Lowe has taken the unusual step of arranging a press conference one and a half hours after the RBA decision. Why? This allows the Governor time to see how bonds react to a potential tapering announcement and the fact that yield curve control will be coming to an end. It is what is called a ‘parachute meeting’. Designed to halt the terminal fall in bonds. So, expectations of strength into the RBA meeting is not unreasonable.

In many ways the meeting on June 10 at the start of the month was very similar to their April meeting. Interest rates were kept unchanged and the size of the bond purchases (PEPP) were unchanged at €1.85 trillion.QE purchases are continuing at the speed of €20 billion a month, but the differences were in the emphasis of the last meeting.

There were four reasons for increasing optimism from the ECB going forward.

Firstly, immediately after the meeting, a sources piece revealed that three ECB board members were in favour of bond tapering, There had been some expectations around the middle of May that the ECB would taper at their June meeting. These expectations gradually dissipated as the date grew closer to June 10 due to a flurry of dovish comments in the run up to the meeting, However, the ECB board members ready to taper shows a optimism mounting.

Fourthly, Christine Lagarde said that growth risks were no longer’tilted to the downside’. Instead they were are now seen as ‘broadly balanced’.

So, al in all there was some decent optimism here. However, when it comes to talk about tapering Christine Lagarde was very guarded, In responding to a direct question on tapering she said that ‘You’re going to be bored with me, but I am going to repeat myself. Any discussion about exit from the PEPP, as you just mentioned, would be premature, it’s too early and it will come in due course. Certainly for the moment it’s too early and premature, as simple as that’. So, the owl has spoken

EURCHF longs look attractive from a macro perspective. Over the course of the next 6 months it would be reasonable to see further EURCHF upside on a normalisation process from the ECB if the eurozone economy continues to bounce back. The outlook for COVID-19 in the eurozone could invalidate this outlook, as could a rapid slowdown in the eurozone.

However, the tone of the meeting was broadly optimistic. The BoC’s perspective is that, ‘with COVID-19 cases falling in many countries and vaccine coverage rising, global economic activity is picking up.’ The BoC noted that the US is experiencing a strong recovery and that a rebound is starting to take place in Europe.

The BoC on inflation

They see inflation rising higher in the near term. Inflation is expected to remain near 3% over the summer, but ease later in the year. The BoC noted that core inflation had risen less then CPI inflation. Central banks will be keeping a close eye on inflation to ensure it doesn’t run out of control. The BoC firmly expects transitory inflation like the Federal Reserve and falling inflation into year end.

Other points to note

Like April’s meeting concerns remain about low wage workers, but these concerns should be fine as job openings remain strong, so jobs should pick up from here as Canada is quickly vaccinating its citizens.

The fall in jobs is largely due to COVID-19 restrictions that Canada went back into and not necessarily a wider problem. So, expect this to pass. Also, a strong jobs report will tick the BoC’s box and could lead to some CAD strength if/when it comes.

The housing market once again came under the eye of the BoC, but it was just one line in the statement, ‘housing market activity is expected to moderate but remain elevated’. Ok, move along for now.

Path of the CAD

After the April central bank meeting it was reasonable to expect USDCAD weakness. However, the outlook remains more neutral for now out of June’s meeting depending on the USD moves with a near term USDCAD upside bias favoured.  However, CADJPY and CADCHF dip buyers continue to make sense as the BoC are still on track for further bond tapering in July.

This was a holding meeting for the BoC, but the broad optimism remains the same with the BoC attributing the recent wobble to renewed restrictions on Canada’s third COVID wave.”Despite the second wave of the virus, first quarter GDP growth came in at a robust 5.6 per cent. While this was lower than the Bank had projected, the underlying details indicate rising confidence and resilient demand. Household spending was stronger than expected, while businesses drew down inventories and increased imports more than anticipated. Renewed lockdowns associated with the third wave are dampening economic activity in the second quarter, largely as anticipated”

Next meeting on July 14.

Remember that stronger oil supports the CAD as around 17% of all Canadian exports are oil related. There is negative correlation between USD/CAD and oil has broken down recently. Canada’s top export is Crude Petroleum at over $66 billion and around 15.5% of Canada’s total exports.

Federal Reserve dumps the script of ‘no rate rises until 2024’

The major news was that there was a hawkish shift from the dot plots at the last interest rate meeting. In the end the dot plot saw more members opting for earlier rate hikes in this meeting than last. The June meeting saw 7 members looking for hikes in 2022 and 13 members in 2023. This was a significant jump from the March meeting where only 4 members saw a hike in 2022 and 7 members saw hikes in 2023. This resulted in the US10 year yields jumping higher and does give the USD a more bullish outlook now in the near term.

The path of QE stayed at $120 bln per month and guidance was unchanged, the IOER rate was increased to 15bps from 10bps (this was not a hike just a technical adjustment).

One of the noteworthy elements was that the following line was removed from the latest statement, ‘ The COVID-19 pandemic is causing tremendous human and economic hardship across the United States and around the world’. This sentence was replaced by, ‘Progress on vaccination has reduced the spread of COVID-19 in the United States’. This is far more optimistic and shows a country coming out of COVID-19. In the press conference Powell was upbeat surrounding the labour market stating that, ‘it is clear we are on a path to a very strong labour market’. 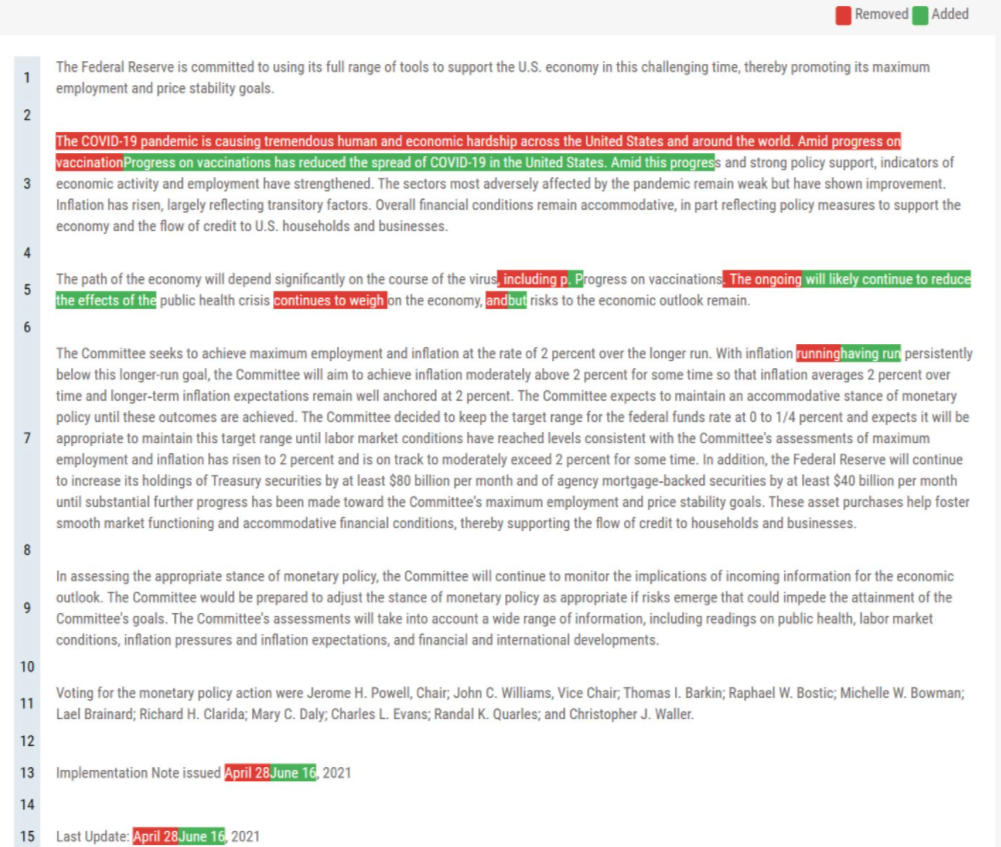 In the Press conference Fed Chair Powell recognised that ‘inflation could turn out to be higher and more persistent than we expect’. This is a nod to the recent strong run of CPI data that has come out. Some in the Fed are clearly concerned that inflation may not be transitory. However, although the inflation projections for this year for Core PCE rose to 3.0% from 2.2% the 2022 forecast was only revised slightly higher to 2.1% and the 2023 forecast remained unchanged. This means the core Fed message is that the majority still expect inflation to be transitory. Powell pointed out that the forces weighed on inflation for the last 25 years are still in place. Powell was upbeat surrounding the labour market stating that, ‘it is clear we are on a path to a very strong labour market’. This sets up July for the Fed to announce its bond tapering plan.

Clear shift from the Fed. Near term bullish outlook for the USD and bearish outlook for Gold, USDJPY longs on dips makes sense (check US 10 year yields) and XAUSD shorts make sense (check real yields and inflation expectations) from $1830. The sweet spot for gold selling is US 10 year yields rising, and inflation measures falling. Obviously one to watch on the Fed expectations, but this opens a bottle it is hard to put the cork back into. 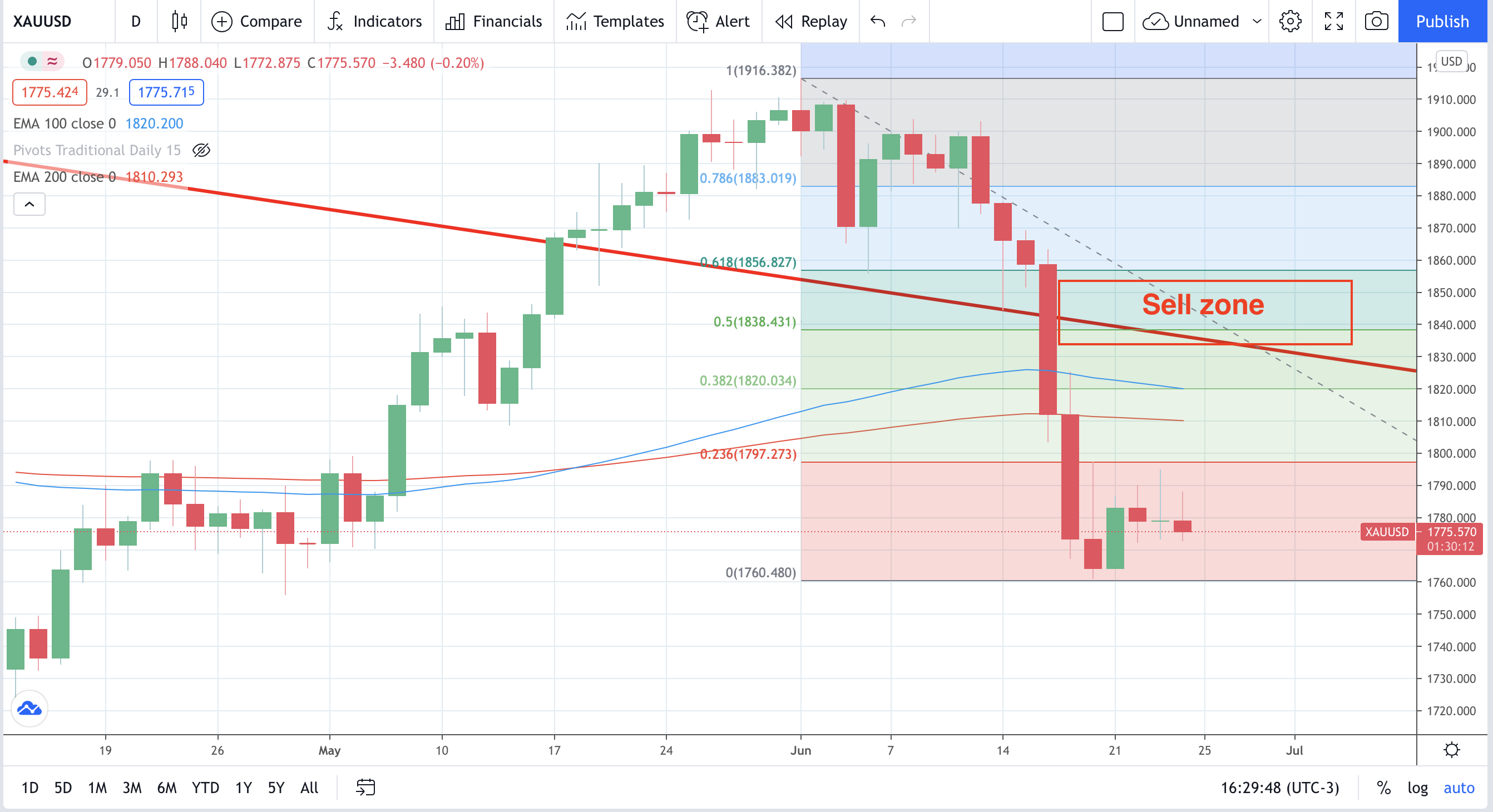